LE QUANG-ARCHITECT(S)
2022 - ARCHITECTURE MASTERPRIZE 2022 !!!
Award winning project
lequang-architects (Berlin)
We won the AMP 2022 architecture award with the concept project of Binhdinh Green Waves museum. This is one of the key national competition projects that we participate in with our landscape partner LJ-Group and technical partner SCA.

In this project, we tried to provide a proposal from urban planning to programming solutions for museums. Its aim is to create a mixture of landscape and display area that not only caters to museum-goers but also a public space that engages people in the city, a truly 'living museum' that creates an ecosystem around it.
​
The project, named the best concept project, will be on display at the Guggenheim Museum Bilbao in Spain during the AMP 2022 awards ceremony program.
Read more about this Award 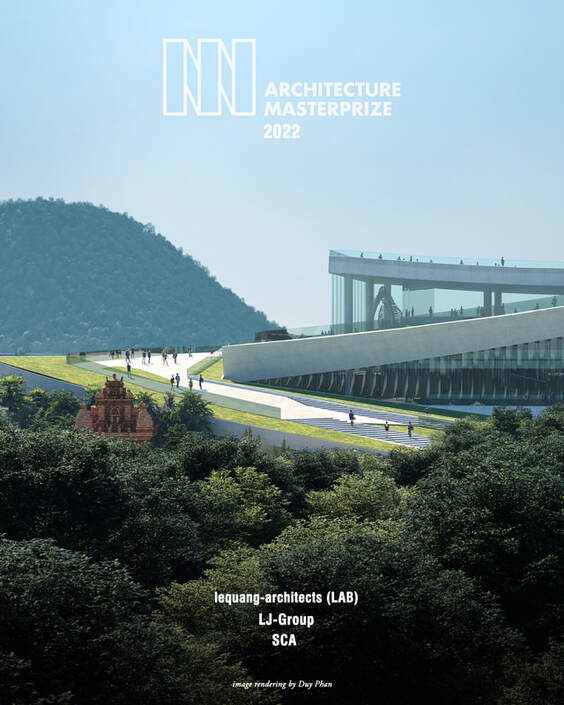 𝐥𝐞𝐪𝐮𝐚𝐧𝐠-𝐚𝐫𝐜𝐡𝐢𝐭𝐞𝐜𝐭𝐬 (𝐋𝐀𝐁) won the project to design a factory/R&D Center with 30.000sqm in HCMC. In this project, we focus on built-environment of the industrial zone in the south of Vietnam. We hope the project will improve the work environment for the local worker here, especially during intensive Co-vid time. 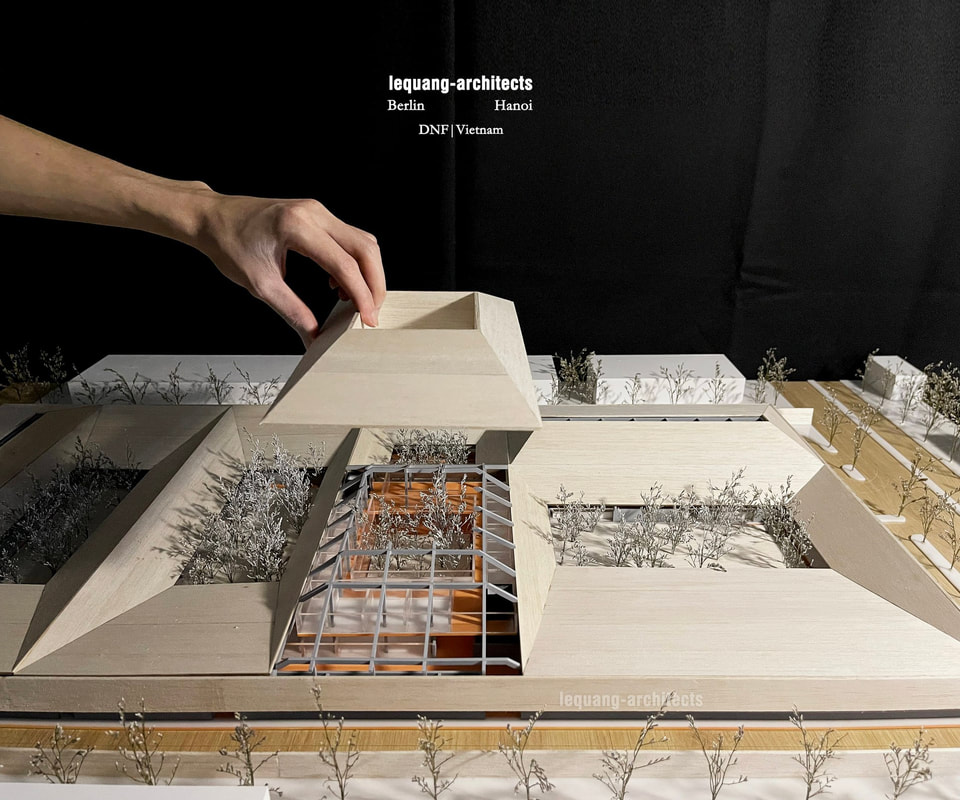 Our projet JKH won  ARCHITECTURE MASTERPRIZE 2021. The prize to be considered as the World's greatest award for Architecture. We want to share this honor with the local workers in Hoi An who actually built the house.
Read more about this Award 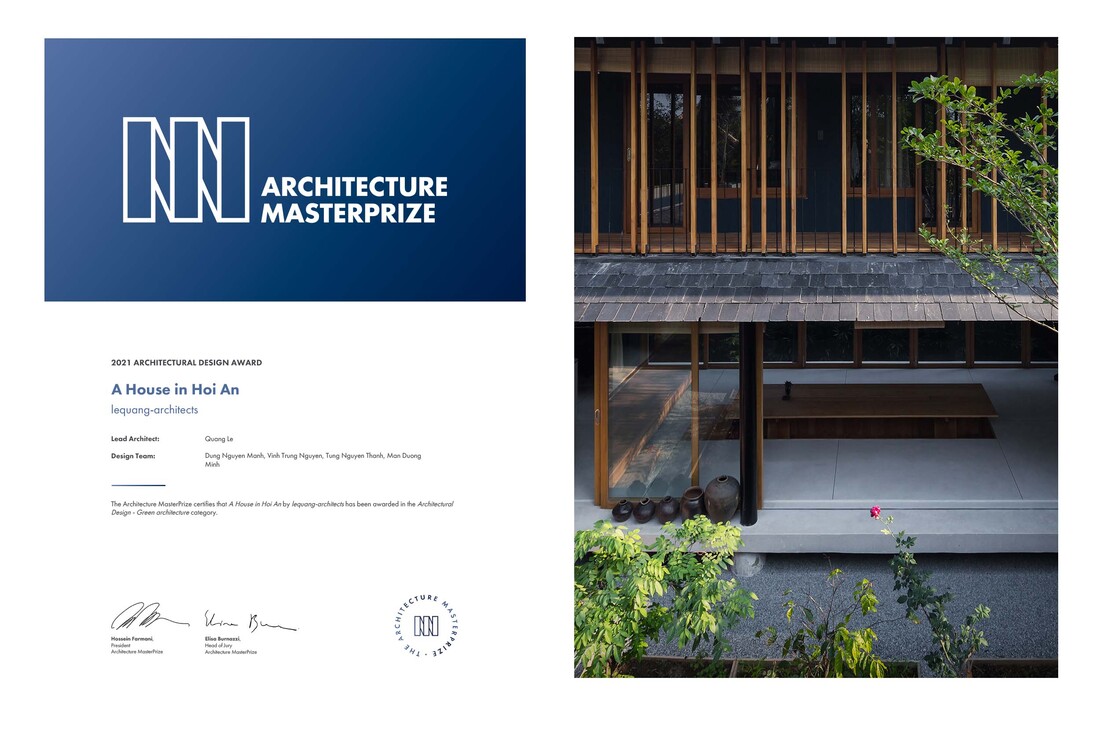 2021 - Backnang West New development
Masterplan Competition - 2nd round
Stuttgart | Germany
𝗹𝗲𝗾𝘂𝗮𝗻𝗴-𝗮𝗿𝗰𝗵𝗶𝘁𝗲𝗰𝘁𝘀 and 𝗟𝗝-𝗔𝘀𝗶𝗮 did 2nd round competition in Backnang West near Stuttgart.
The project focused on new development in the post-industrial zone with programming study and mobility system.
In the end of the day, we tried to have diverse building typologies in one area. The new development creates a new sense of land ownership. It links all landowners into one scenario where they can share profit based on a different program that relates to themselves.
The master plan developed a series of building scales in order to keep the historical value of the site as an industrial heritage of IBA27.
The project is exhibited in Backnang till the end of May 2021. 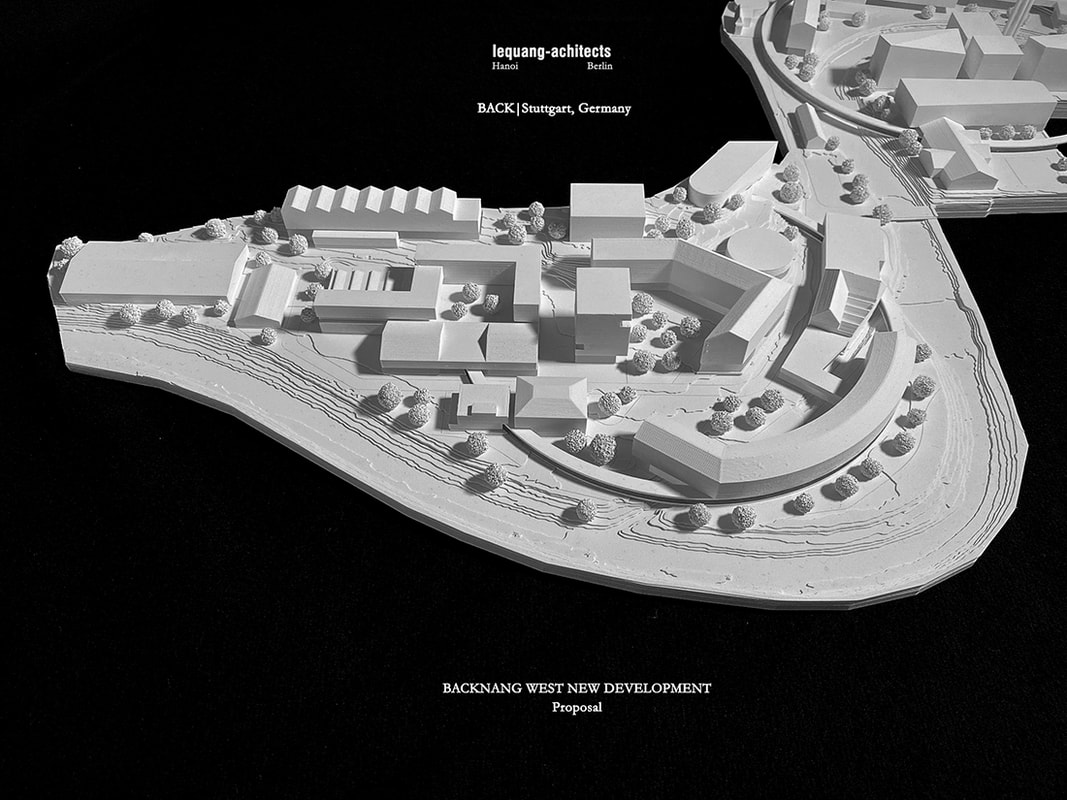 2021 - Twin Cities
Built Project & Urban planning
Quy Nhon | Vietnam
The first urban project we have won in Vietnam. We considered this is a good case to implemented our design system for project management there.
​The project will be invested about 500 Mio USD for the first phase (2020-2025), the main study based on the local biological system and the images of the ''Cham Tower'' - UNESCO heritage of the city. 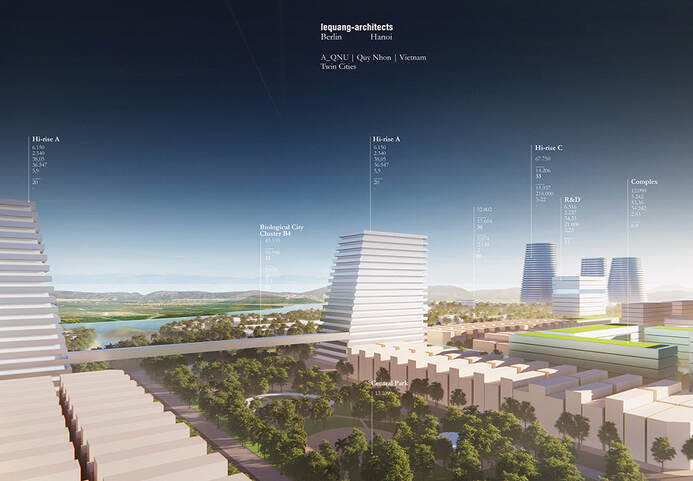 2020 - INNS LOOP
Competition Proposal
Innsbruck| Austria
​
The City Loop| Project proposal in Austria.
Our project focuses on providing a new scenario for programming in an old town of a city in Austria. The simple intervention can activate the current program of the site and on the other side it creating the chances for the new program in the future.
The intervention in the city, would not have to replace all the legacy we have, it just helps the city performs better with the current infrastructure. 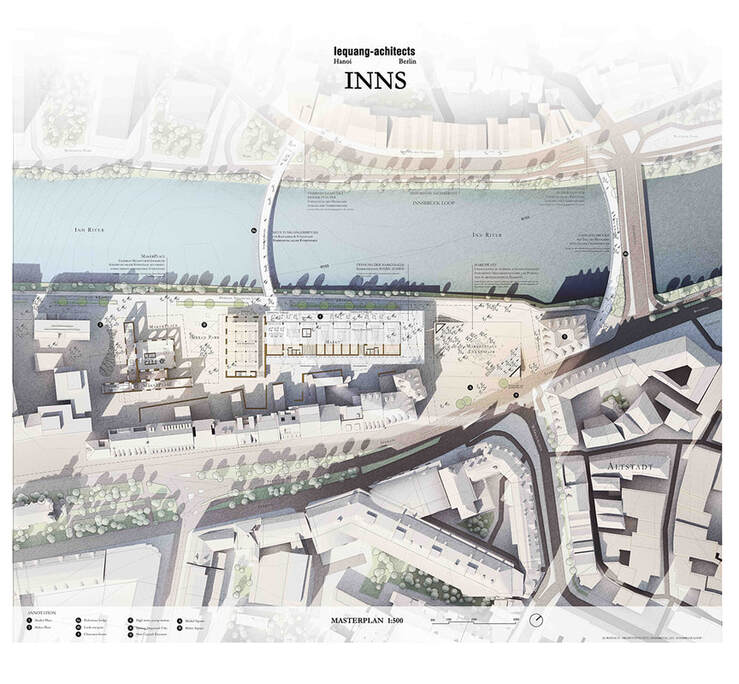 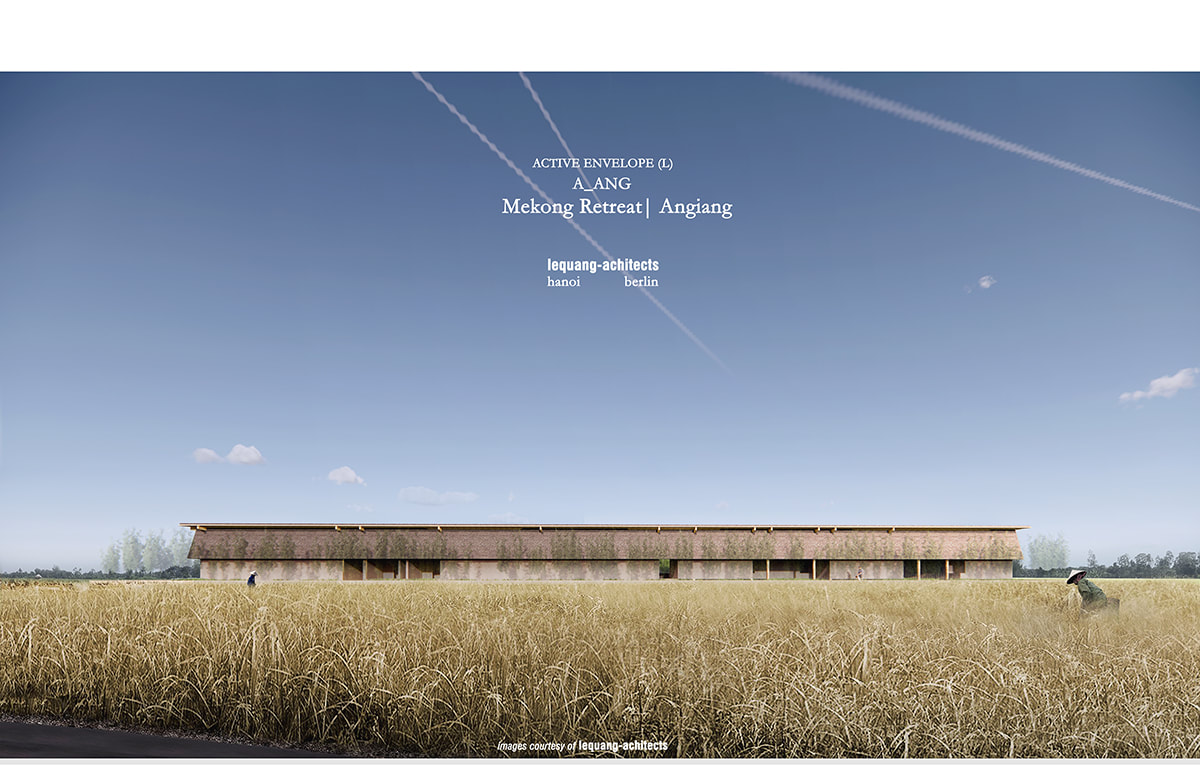 2020 - Mekong Retreat
Built Project & Masterplan
Angiang| Vietnam
​
lequang-architect(s) developed masterplan & built  project in Mekong Delta. It is another practice for ''Active Envelope'' in scale ''L''.
The Site located on the river bank. We proposed programming going on the perimeter of the site and creating a hidden water garden inside. The landscape design will take into account the variation of water level in the dry season and the rainy season. That feature to be considered as the identity of this area.

2019 - ACTIVE ENVELOPE (S)
Built Project
Hoi An, Vietnam
Our first built project in Hoi An, Vietnam.
The selected project our study of "Active Envelope (S)". The building will be built in a seaside village located in the middle of Vietnam. This small house will act as the home of a family, on another hand, it will also provide space for community activities. There are some unspecified- spaces scattered throughout the house, which will be developed and used by users for certain purposes depending on the situation in which it is occupied. 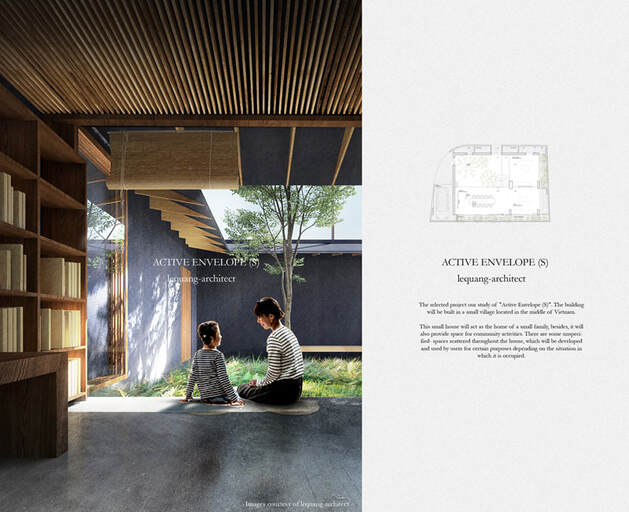 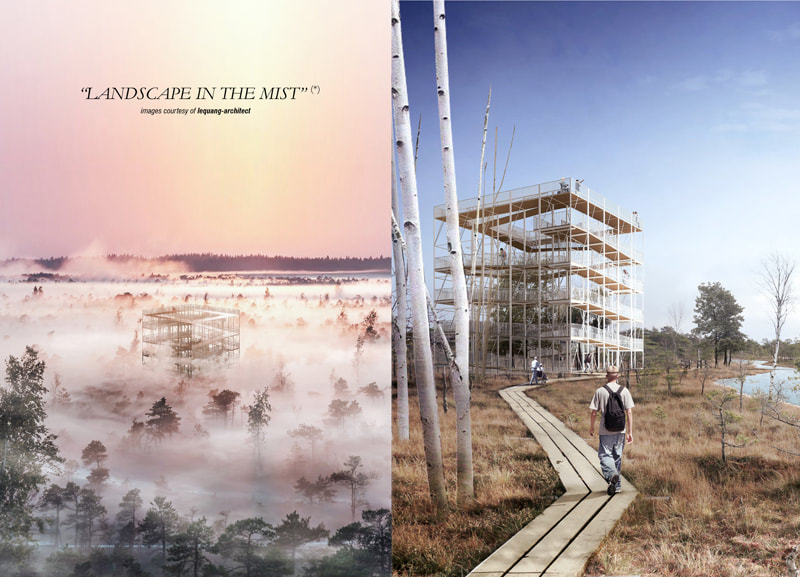 2019 - LANDSCAPE IN THE MIST(*)
Competition_3rd Prize
Kemeri, Latvia
The Project works on the boundary line between "Landscape and the Mist" as linking space where the scaffolding structure is conceived as space of community become a social space. It is not just an ObservatioTower for looking to the Park, on the other hand, it sends a message to people and the landscape about a free world, not divided by human knowledge and their curiosity.
With the understanding about the site plan and its humidity, the beauty of the architecture structure could be integrated into the mist here in the morning and it emphasizes the poetic image of Kemeri park in different senses.
Due to the sensitive nature of the environment surrounding, we propose the main structure will be made by scaffolding, this is the flexible material which could be borrow from the other site and it does not require any heavy machinery or large-scale excavation to take place.
When planning the Project designs, we also considered the high soil humidity, which makes walking on it directly all but impossible, therefore the scaffolding will be used as the platform of foodbridge and in the end, the wooden deck will be implemented on top. This solution creates a series of foodbridges to access to the Observation tower.
Detail to be implemented
Official announcement in OPENGAP 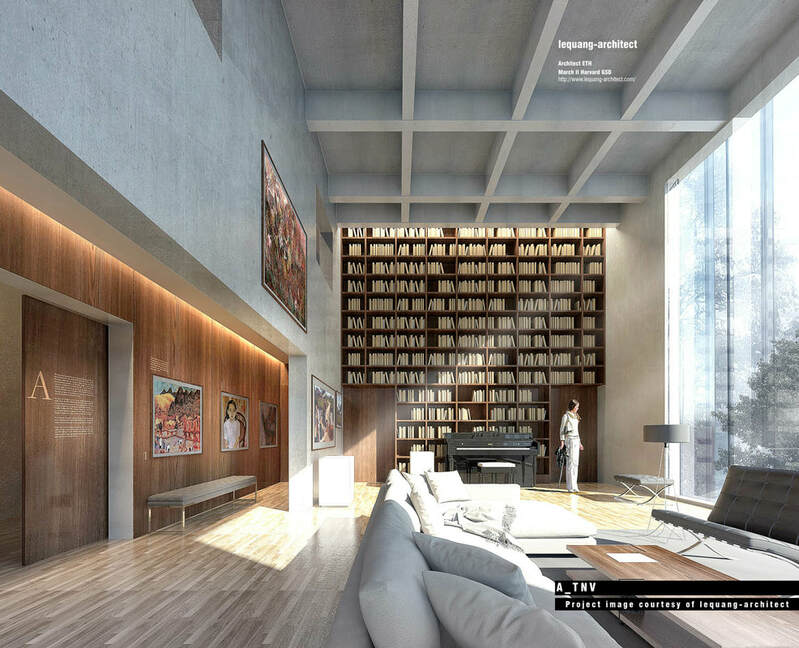 TNV is a private exhibition house in conjunction with housing. The project will be built on the riverside and has a panoramic view of nature. The opening and closing of three spatial will mix with the artworks in a specific proportion. In the end, the result is going to be a series of display situations. It does not only create a showcase for the artworks of the gallery's owner but also emphasizes the role of the ''real-life paintings'' which are captured through large windows.
This building will be the first built-up project of lequang-architect in HCMC, Vietnam. 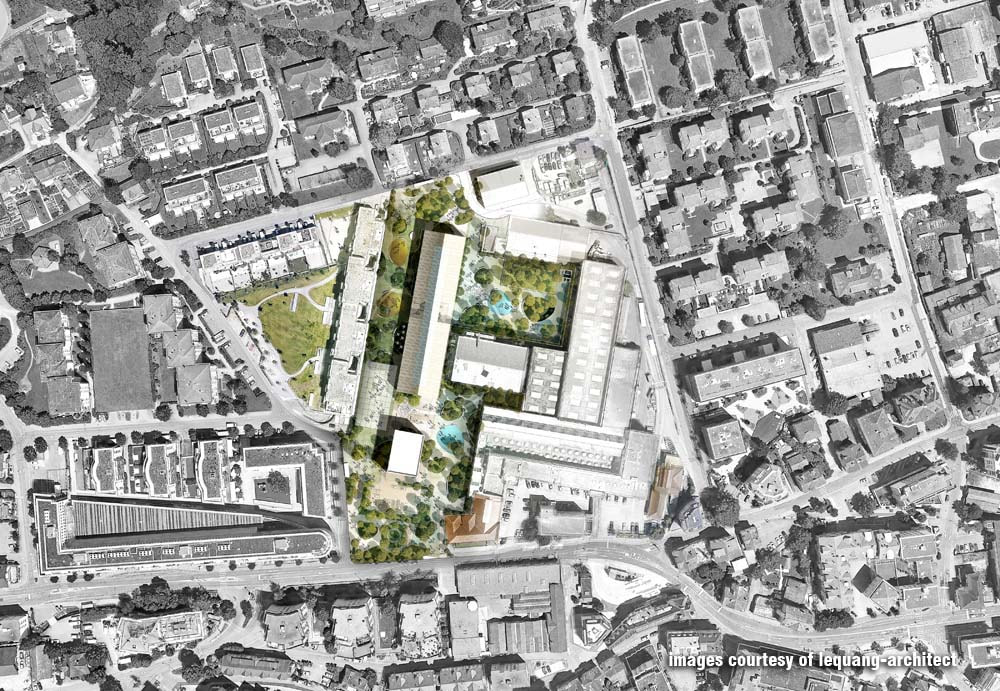 Today, Kriens faces three core challenges to overcome: the demolition of plants from the industrial period. So the main challenge that the city is confronted with today when dealing with the renewal of central area of Kriens (Andrizt Area), how to create an attractive local center whereby the physical buildings themselves form the catalyst for the social integration. Whereby bottom-up initiatives from every individual dweller are encouraged.Whereby the masterplan of this old factory become self-reliant and self-organising and whereby buildings creates the connection between them and between people in the city.

In the end of the day, we recognized that the most important feature to make this public area is belong to the density of population & density of construction and its openable feature to public space. In term of revedelopment process, the density and the flow of people will be two main factors for breaking this “massive block” in Andrizt Area.
Details to be implemented 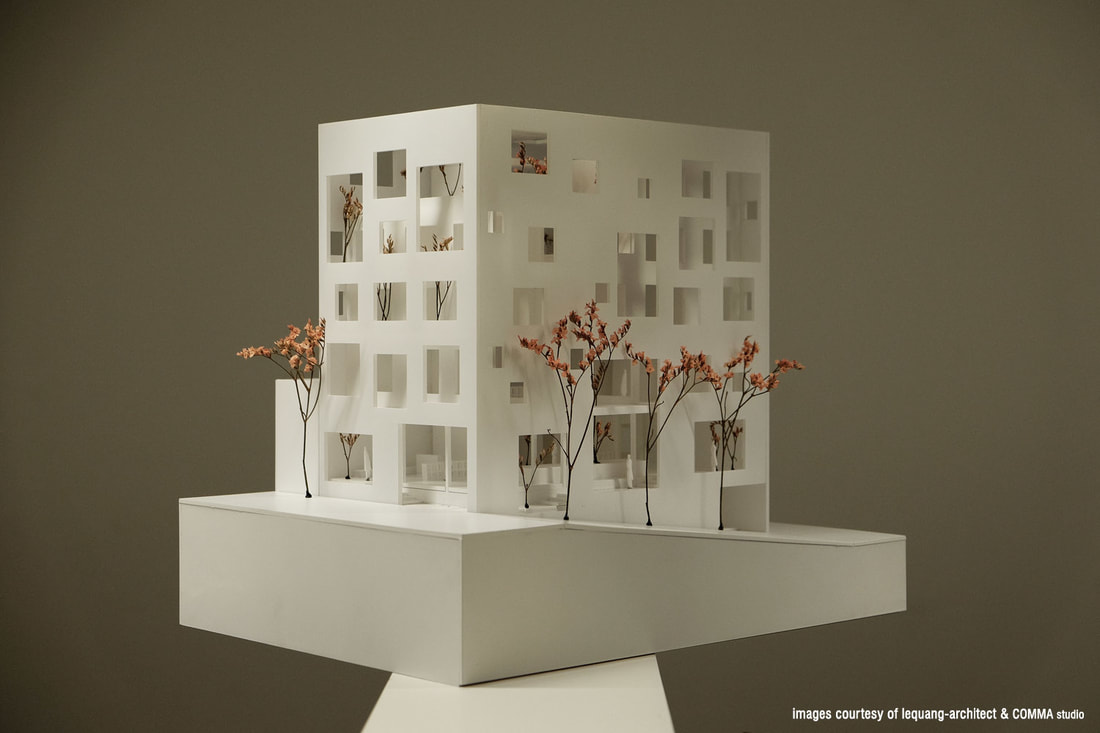 QBH is the research project for Dormitory building in Quang Binh province, Vietnam. The project focuses on building programming and building performing to be adapted with the specific local climate and the construction feasibility. In the end, we provided a typology for the programming mixture with natural light, natural ventilation and using local knowledge to create a sustainable process for the build environment.
The construction work will be finished in 2019. 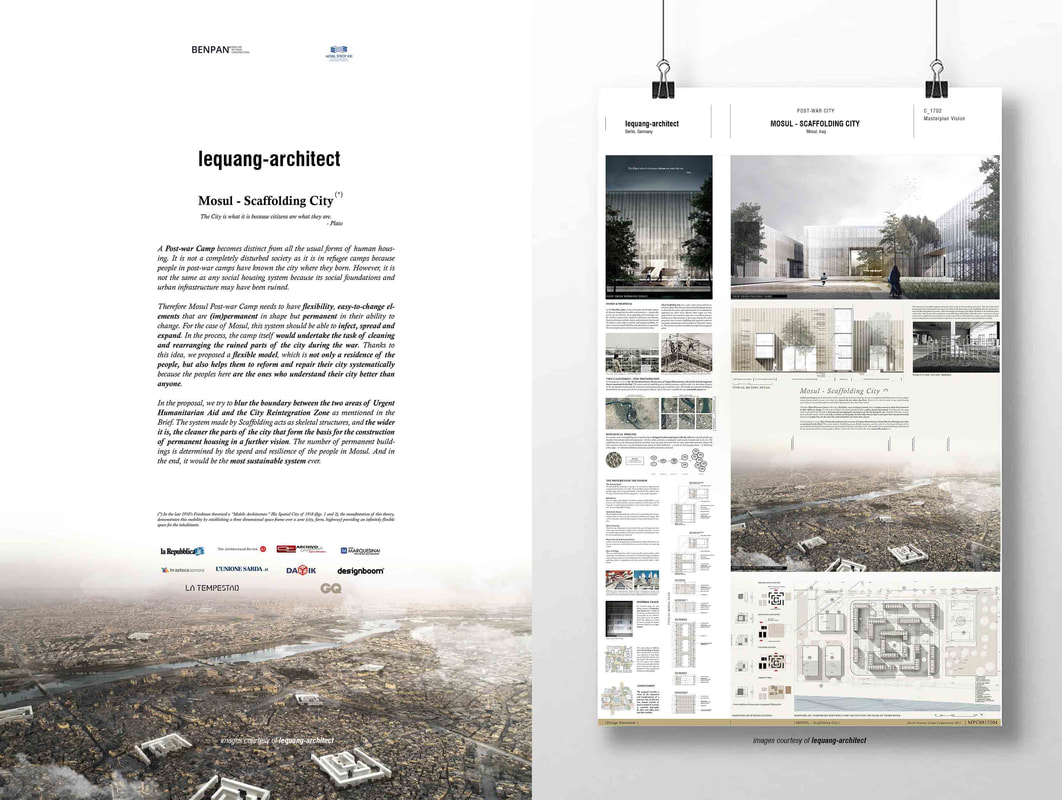 ​A Post-war Camp becomes distinct from all the usual forms of human housing. It is not a completely disturbed society as it is in refugee camps because people in post-war camps have known the city where they born. However, it is not the same as any social housing system because its social foundations and urban infrastructure may have been ruined.
Therefore Mosul Post-war Camp needs to have flexibility, easy-to-change elements that are (im)permanent in shape but permanent in their ability to change. For the case of Mosul, this system should be able to infect, spread and expand. In the process, the camp itself would undertake the task of cleaning and rearranging the ruined parts of the city during the war. Thanks to this idea, we proposed a flexible model, which is not only a residence of the people, but also helps them to reform and repair their city systematically because the peoples here are the ones who understand their city better than anyone.
Official  announcement in ArchStorming
Details to be implemented 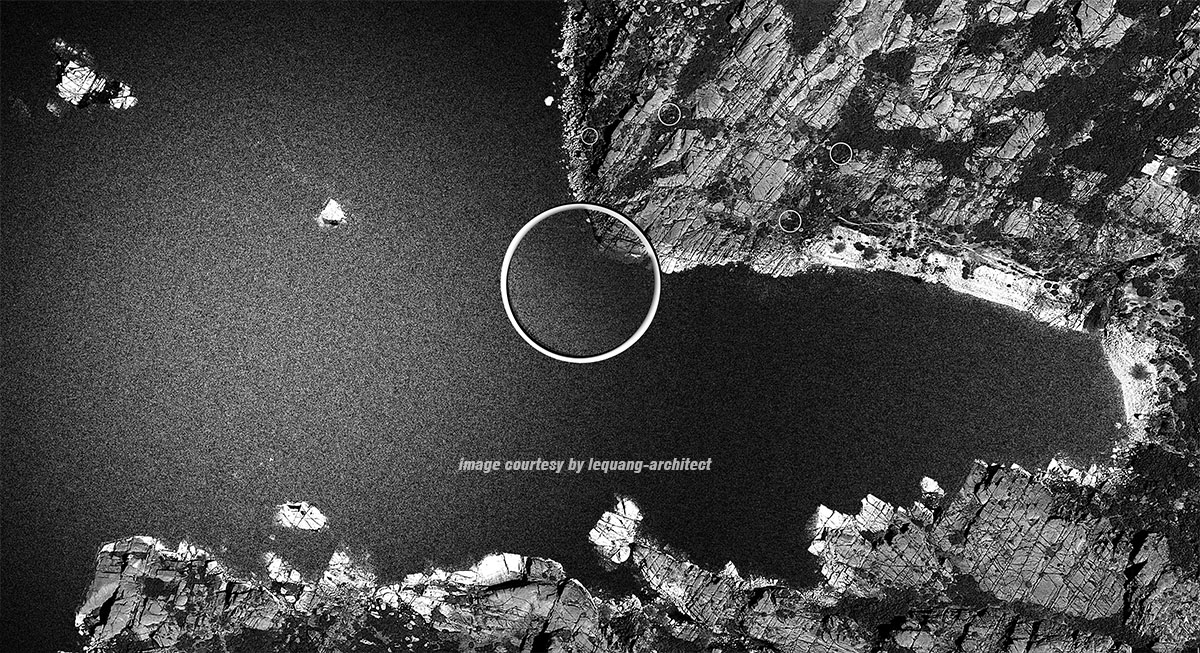 Inspiration Hotel
Dramatic landscape has created from the sudden change of the natural elements. It could be a sudden change in length, depth or a sudden change of materials such as water, rock, negative and positive... People from time to time immemorial fascinated inherently by these factors, in the most beautiful dreams, people have dreamed of dramatic changes and utopia illusion.
We approached this projects based on the concerns about water, stone and humans on the land. The granite cliffs sliding down to the calm water's edge has aroused first imagination about a secret valley which is surrounded by water and stone - the existing nature elements.
Official  announcement in OpenGap
readmore
2016 - WORLD ARCHITECTURE FESTIVAL 2016 !!!!
Finalist - Best of Experimental Projects
BERLIN WALLS - Berlin
-The Project in Berlin will be presented in Arena Berlin , 16-17th Nov, 2016 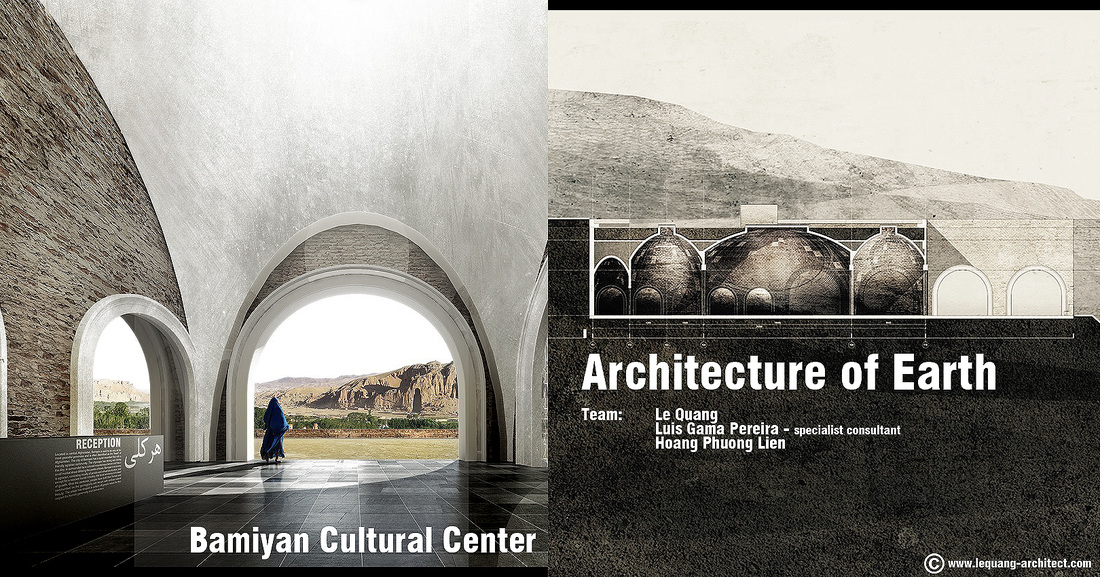 ​The first projecting part of overcoming the dichotomy between geometry and organic that is stated in Islamic architecture.A dichotomy in which the higher mental-construction geometry-imposed with authority to the chaos of the inhospitable and irreducible nature. Overcoming this dichotomy means using geometry to sort programs, applications, things with a method. But it also means leaving space for freedom and surprise, incorporating chance. We propose a project in which the organic and mutable nature finds its place in the geometric order. The geometry does not produce an inert space, but also guarantees the conditions for the organic develop, live, reproduce and die, in a supportive environment. Oasis, gardens, patios, planters ... is the way in which our culture has tried to preserve life against the aggressions (wind, sun, drought ...). Our building will to do the same.
The building is recognized as a closed universe inside a mud-brick wall. This fundamental Islamic design element of architectural tradition, in which the wall is not an element ... is an opaque veil that suggests an infinite dimension in which the eye is lost, the light is screened, the stars are drawn and the imagination takes paths that are never the same.

The project aim is to the spirit of two separate elements, but exist in harmony with each other. Reflect the views of the Vietnamese people in particular and the general view of the east. It is the “earth” and “heaven”. From there to the location of “People” between the Republic junction. Viewers again really get typical signals of Vietnam, the Vietnamese worldview. Architectural elements are rebuilding and condensation into a single sense
​
Read more 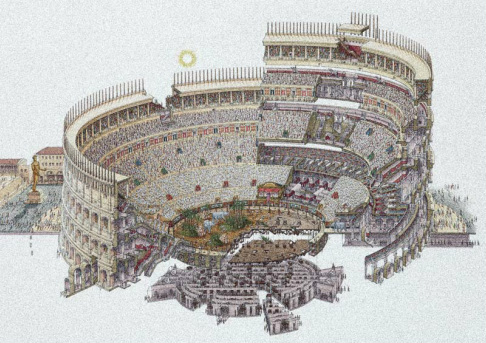 
“LIFE” SHOW
At this stage, we are developing a plan with thoughts of the relationship between the public and the show, as well as between the show and urban context. Hence, we propose a «Life» show.

LONG FACADE
What can we do
Analysis project