Highlights of the jury:
﻿A proposal with a very clear and strong concept.
The project goes beyond romantic visions of nature as something independent of human beings. It is a reflection on the role of man in transforming their environment and nature as a concept that originates in specific cultural contexts.
Being located above one of the largest human intervention in nature, the project focuses on showing not only the beauty of nature but also about the human desire for power and control and intervene to nature.
The concept becomes stronger with the selection of a basic material like concrete and the use of the existing structure avoiding new damage to nature.

View from top of the nature interpretation center of Alps
I.Intro
Naturalism is a science mainly based on man's curiosity and need of discovering about nature.
Where does curiosity come from? It is human’s desire to conquer and understand nature. It is the dream of mankind which is already well demonstrated through legends. Over a long continuous improvement process, people gradually get a grasp of the world, thus  one way or another try to benefit from nature without destroying it. This is considered a dream come true for us.

In many ways, the Grande Dixence Dam is one such work , a great structure of man which shows the desired progress as well as effort to protect the environment and ecological balance . With suitable solution, humans can either survive , protect and conquer nature.

Much like the miracle of holy Moses ( "Moses parts the RED sea"). Grande Dixence Dam is a human miracle in taming nature, entailing a close relationship. Not only does it create green  energy but also keep balance for ecosystems . This giant structure becomes the starting point  for us to develop  this project: Nature Interpretation center of the Apls. 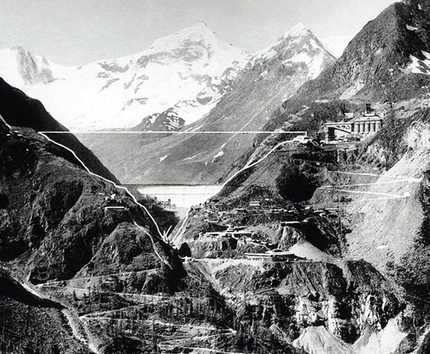 II. Site Location
a.Grande Dixence Dam
The Grande Dixence Dam is a concrete gravity dam on the Dixence River at the head of the Val d'Hérens in the canton of Valais in Switzerland. At 285 m (935 ft) high, it is the tallest gravity dam in the world and is part of the Cleuson-Dixence Complex. With the primary purpose of hydroelectric power generation, the dam fuels four power stations, totaling the installed capacity to 2,069 MW, generating approximately 2,000 GWh annually, enough to power 400,000 Swiss households.

​The dam withholds Lac des Dix (Lake Dix), its reservoir. With a surface area of 4 km², it is the second largest lake in Valais and the largest lake above 2,000 m in the Alps. The reservoir receives its water from four different pumping stations; the Z’Mutt, Stafel, Ferpècle and Arolla. At peak capacity, it contains approximately 400,000,000 m3 (1.4×1010 cu ft) of water, with depths reaching up to 284 m (932 ft).Construction on the dam began in 1950 and was completed in 1964, before officially commissioning in 1965.

III.PROPOSAL
Because electricity cannot be stored, except in very small quantities, the hydropower plants play an essential role. They are the only generating plants capable of injecting considerable power into the grid within a few minutes. They are also the only plants able to hold in reserve the energy surpluses needed to meet a demand that varies from hour to hour, from day to day, from season to season. The dams are the only “canned” variety of electricity. Production occurs only on demand, and there are no environmentally harmful emissions. This green energy is a security for future generations

What a paradox! Self-sufficient for so long, and even an exporter of electricity, Switzerland is poised to become a net importer of electricity. Under these circumstances, with energy becoming rarer and fears about global warming, hydropower is more than ever a form of energy that should be given priority. Those who initiated the Grande Dixence construction project were always aware of this. Could there ever be a finer source of environmentally-friendly energy! But apart from the fact that this is a clean and renewable source of electricity, the design engineers paid particular attention to the environment. In the 1950s, ecology may not yet have been a core concern, but those who built Grande Dixence were ahead of their time when it came to mountain conservation. Their constant endeavour was to preserve the natural environment, to blend completely into the grandiose Alpine setting. Water pipes, power plants, pumping stations, everything that could be hidden away beneath the surface, was buried. The earthworks were returned to their natural state.

​Nonetheless, energy production, transmission and consumption are not neutral for the environment. Even if the energy comes from a renewable source, as hydropower does, with no release of greenhouse gases into the atmosphere, great care must be taken all along the chain of activity that leads from a drop of water to the electron that is supplied to the electric power socket. The design, realization and operation of structures and facilities are consequently the subject of detailed attention. Safety and respect for the environment, a major priority everywhere and at every moment, can thus be ensured. 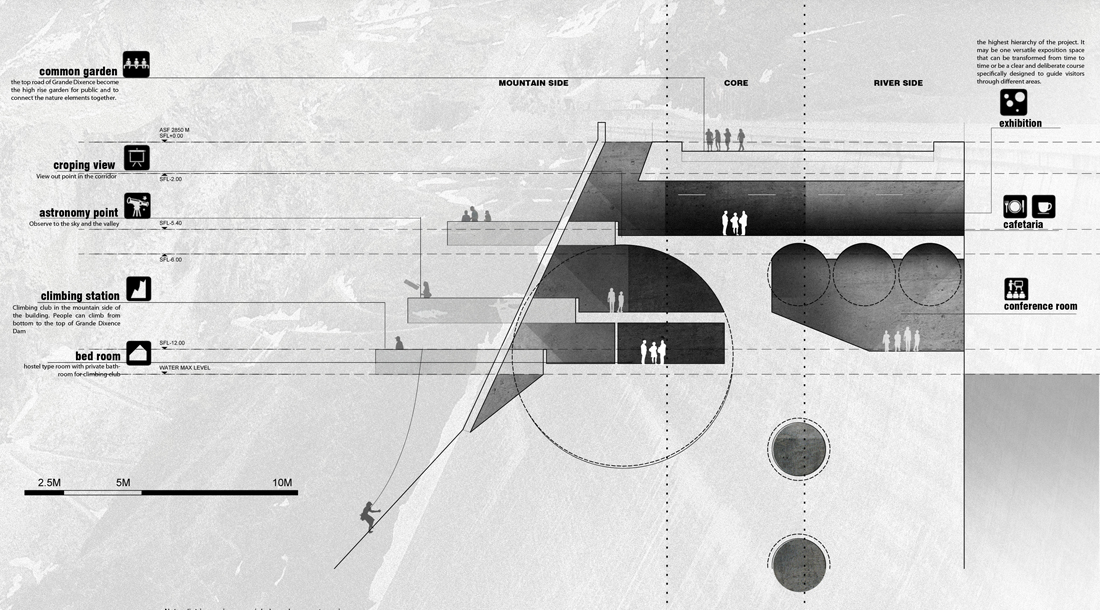 Section A-A
Accordingly, a nature center is built in the heart of Grande Dixence Dam . We want to create parallels with 6 million m3 of concrete and transplant this space, reusing hollow parts inside the dam ( water transmission shaft , big pipes ... ).The space should be structured by one concrete-core in the middle (including lifts , staircase , technical , toilet ) , the core of the building divided the area into two distinctive parts : River side and Mountain side . This emphasizes the current situation with elements separated by  the dam.

On each side , visitor  can join the respective activities , such as boating , swimming , water resource researching .. ( at River side) mountain climbing , hiking , astronomy ... ( Mountain side) . The sudden change of place and view allows visitors to tremendously experience Grande Dixence Dam ‘s profound influence on nature and people.

​The main sidewalk on the top of the dam becomes greenery line, connecting two slopes of the valley . On the other hand it becomes a common area to serve thousands of climbers each week. 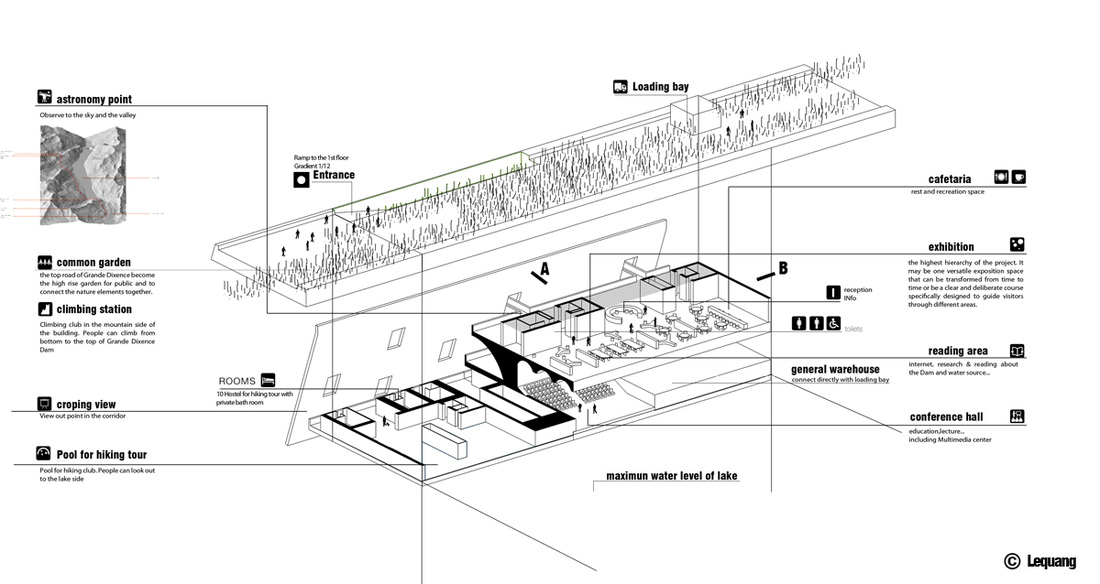 Schema of the spaces
b. Historic value of Grande Dixence
Dix Valley soon became accepted as the site with the greatest potential for development. This high mountai valley had all the geological and topographical conditions that made it ideal for conversion to a giant reservoir. No built-up area would be affected, the only agricultural land was high altitude pasture and, aboveall, the predicted storage capacity was enormous: 400million m3.

Geologists, hydrologists, surveyors and engineers tackled the solving of two major problems. First, how to enlarge the existing lake with the Dixence complex built some 15 years before. Second, how to create collecting works capable of gathering water from the neighbouring Matter, Ferpècle and Arolla valleys. These two achievements engaged more than 3000 men in a struggle that lasted through to the beginning of the 1960s. A bold avant-garde project that today contributes to the well-being of the whole community.

Half a century has passed since human endeavour built the Grande Dixence dam. And fifty years later, the wall nestling between the flanks of the Dix Valley remains unique. At 285 metres, it is still the highest wall in the world! In order to be able to contain themore than 400millionm3 of water stored each year (a volume equal to 8000 years of the Valais grape harvest for example), the Grande Dixence gravity damhas beatenmany records. No fewer than 6 million m3 of concrete were poured between the mountains: a wall 1.5 metre high and 10 cm wide could be built around the equator with that volume of concrete. At its base, the dam is two hundred metres thick (equal to the length of two football pitches). At the top - in technical terms the crest of the dam - it narrows to a ribbon of only…15 metres. To make the soil foundation watertight, the grout curtain surrounding the dam goes down 200 metres into the gneiss and granite of the surrounding mountain mass. It extends 100minto each valley bank. The wall itself ismade up of 16mx 16mconcrete blocks jointed together in a way that ensures maximum cohesion, strength and impermeability. Visitors entering the Grande Dixence cavern on foot are always surprised by the bottomless shafts that allow the structure to bemonitored. Stretched by 150 kilo counterweights, seven pendulums plunge silently across the full depth of the wall. They measure deformation in the retaining wall continuously. This system allows the movements of the dam to be checked to an accuracy of 5 hundredths of a millimeter. Because the concretemonster breathes! This 15-million- tonne gravity dam, this colossus that is heavier than the Great Pyramid of Cheops is sensitive to change.

Depending on whether its stomach - its lake - is full or empty, the crestmoves 11 centimetres downstream or back to its initial position.

Apparently peaceful, Lake Dix is surging energy domesticated byman. 3.65 km2 in area (for comparison, the area of Lake Joux, in Vaud canton, is 9.5 km2), it is 5.3 km long and has a maximum depth of 227 metres. This energy reserve enables enough electricity to be supplied throughout the year to meet the needs of ––a region of around 400,000 households.
​
Water…The primeval element without which there can be no life.

Cropping view in the "mountain side"
V. SUSTAINABLE
Aware of the value of the environment, Grande Dixencehas chosen to maintain and improve its generating equipment and structures in order to optimize the use of the natural resource. To that end, it has a numberof committments, including:
.Respect for the legal requirements, and for the terms of the concessions and permits.
.Ensuring that operations are carried out in a way that limits as far as possible the impacts on watercourses and their ecosystems (flushing operations, etc.) and preventing pollution.
.Minimizing the impact on the landscape caused by the carrying out of civil engineering works.
.Maintaining a constructive dialogue with partners, the public and communities affected by the facilities.
.Promoting cooperation with service providers and suppliers that have a concern for the environment.
.Constantly improving its environmental performance through action programmes.

Human lives in harmony with nature
On the other hand, human conquers nature. This is the real power of human nature.

Back to Study project page
View My Stats