So, for a renovation project, how to create a vivid world inside its heart? When more than one architect involved in the construction.
We have started museum vision projects for 54 Jefferson with that questions.
For me, the revision job for a historic building is a interesting job. When we started with 54 Jefferson, I was thinking of a contemporary orientation to the museum. What will Architects able to do for a Museum which itself has bearing on historical values. What we can do for a museum which itself is an inherently exhibits the largest, is the most worthy of contemplation. I really feel that when listening to a person’s sharing about his memories of this building. And I went to the most important point in this project.

WHAT IS THE PUBLIC MUSEUM ?

Since the 1960 - 1970 the world began to change radically due to the strong development of electronic technology, digital communications and the internet. This makes changing the way people think about themselves as well as the main concepts about space, place - the crucial factor for the architecture. Has appeared a new sense of geography geopolitical bold colors - more economical than physical characteristics, and less bound to the border, but on the map or boundary regions. Also, the way we approach a space has changed. People have many sources and imagination than ever before, and must be sensitive to the special.
So what is a public museum? For me, it is not a physical form, it must be the result of a conflict between the space and the user’s habits. This is explained by the architects of their focal points in space. In this project, we focus on the release of the barrier between the viewer and 54Jefferson. Create a link way for building to link it to the surrounding area. 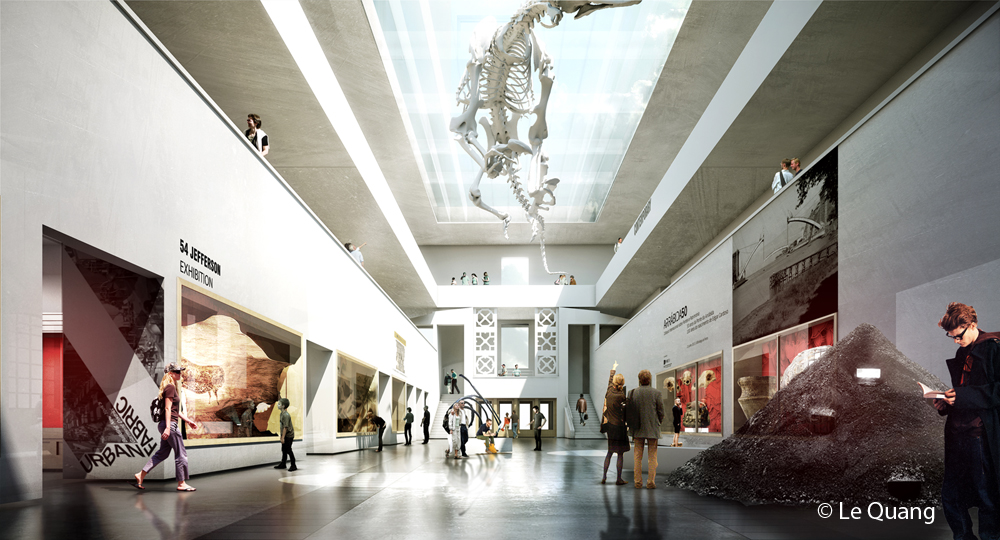 view from main atrium
To minimize the destruction of the old part of the building. We decided to install a new floor in the 3rd floor of the existing building. Its structure is repeated as in the same as downstairs to classic grid column. But we put a system of the light walls and the repeated door and window elements. The intersection space inside the exhibition space for the viewer feel the true face of contemporary elements. We have shown that, It is a completely different way to look despite it seems to repeat the classic elements.
The renovation includes a new exhibition of contemporary floor is fastened to the former by three atriums. At those atriums, the visitor can enjoy the conflict between elements of contemporary and classical elements. Continuous runs through intersection arrays opposition.
This is what we expect.